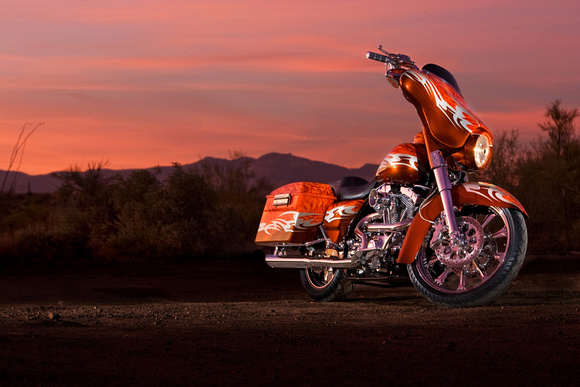 I have been waiting awhile to post this. I shot it several months ago but couldn't put it on Flickr until it came out in Baggers magazine who I shot it for. As you can see this is a custom Harley bagger--and that is about all I know. What can I say? I just shoot 'em! You can find out more about the bike and see the rest of my shots in the April 2009 issue of Baggers which is on stands now (late February). They do that with the dates so you always feel you are picking up a current issue BTW.

This is my favorite shot of the bunch. I shoot mostly cars, at dusk, with ambient light. I have been experimenting with light painting and strobes for some time now but this is the first bike I shot with lights outside.

I started the shoot with a single Profoto 600ws monoblock on a stand with a Vagabond II on power and counterweight duties (I strap it to the base of the stand). I was going bare bulb and working the Profoto Zoom Reflector in and out--it works somewhat like the zoom on your strobe. I also added a sheet of Cinefoil to the bottom of the reflector to keep as much spill as possible off the ground.

Yeah, bare bulb. And I started shooting with the sun out. What I found was that I could set up any shot with the sun as key, and fill the shadow side with the Profoto. I wasn't going for anything dramatic in the beginning, just good, clean, balanced shots--and I was happy with the results.

As the sun began to set I knew I would have some great ambeint light to work with and broke out two SB-26s and put them on stands, also bare bulb. All the lights were fired with eBay triggers. Of course one was giving me a hard time so I switched over to slave--you gotta love the built-in optical on the SB-26 for a backup!

Even though I am using bare buld lights, I would not call this hard light. There are three specific things going on here. First off I am balancing the ambient light of the background with my strobes. I dropped the ambient stop or two. At the same time I am balancing
Paul Morton, Morton Photographic
Powered by ZENFOLIO User Agreement
Cancel
Continue