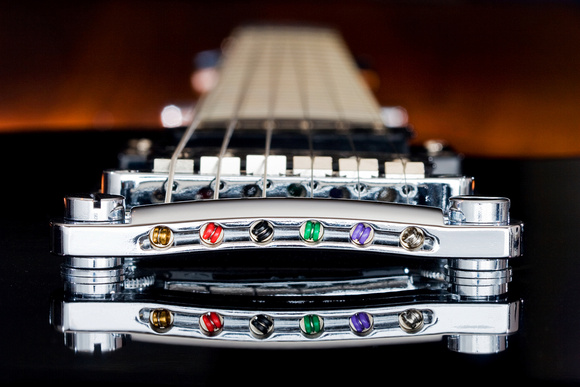 My girlfriend inherited this guitar. Well, actually, her sister did and I have had it for 3 months to shoot. Well it's about time I give it back so I have been playing with it. As it is black and the chrome is pretty much white, I noticed the colorful anchors to the strings. I love different, close-up angles like this and the colors were a bonus. I wanted the neck and strings in the shot so everyone would know it is a guitar and I liked how they appear to be moving due to the shallow depth of field.

It was fairly difficult to get the light on that chrome bar the strings are anchored in. I liked the gradient light in the top part, which came from an SB-26 firing into my ceiling, but the side facing the camera was black until I put a piece of foam-core around my lens and fired two strobes into it. It kind of worked out like a ring light, although it wasn't round.

I also used a couple SB-26s at the other end to light the table and seperate the body from the it. Check out my setup shot to see exactly what I mean...
© Paul Morton
Powered by ZENFOLIO User Agreement
Cancel
Continue